HAPPY THE #1 MOST WATCHED SHOW ON SYFY AND WHY YOUR GONNA LOVE IT !

Chris Meloni  of Law & Order SVU  and Blue Bloods  is killing it on the #1 most watched series on  SyFy.  I’m a SyFy junkie and this series is based on a comic book.  Patton Oswalt plays the voice of Happy , the imaginary crazy unicorn.  Meloni plays Nick Sax. HAPPY! is based on New York Times best-selling author Grant Morrison and Darick Robertson’s graphic novel of the same name. The series follows Nick Sax  – an intoxicated, corrupt ex-cop turned hit man.  Who is adrift in a world of casual murder, soulless sex and betrayal. After a hit gone wrong, his inebriated life is forever changed by a tiny, relentlessly positive, imaginary blue winged horse named Happy (Patton Oswalt). Happy is actually #spoileralert is Nicks daughter’s  imaginary friend that is kidnapped and happy is Nick sidekick to save his daughter. This show is not for kids at all. There are twist and turns. There is some comedy and just some moments when your like what did I just see. It’s worth the watch. I watch it. SyFy’s new badass Nick Sax in HAPPY! #LUSHREVIEWS. COMMENT AND TELL ME WHAT OTHER SHOWS YOU WANT ME TO REVIEW. #SEEHAPPY  IG: @LUSHRADIOONLINE @CEOLUSHYLUSH 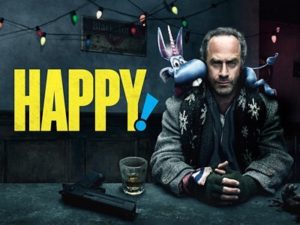 HAPPY ON SYFY #1 SHOW TO WATCH