Bumblebee Movie Is the best Tranformer Movie ever made ! 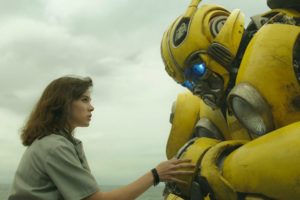 Bumble was one of those movies we all have been waiting for  years. If your a true Transformer franchise fan and you grew up watching Transformer cartoons you know what I mean. Travis Knight’s BumbleBee is the best by far Tranformer installment I have seen so far. Bumblebee starts  with instant live action and it was intense. Most of the time, we have to wait for action but, this movie changed the game.  It takes us to the war on Cybertron, where Bumblebee voiced by (Dylan O’Brien) and his fellow rebels must flee from the evil Decepticons. Optimus Prime (played by Peter Cullen) keeps the Decepticon forces at bay  while  Bumblebee and the  Autobots can escape Cybertron and flee to fine a new home for the Autobots.  Bumblebee is tasked head  to Earth and protecting the planet from Decepticons.  Also, Bumblebee speaks in the beginning and it shows us why he lost his voice like  in past movies.  This is the best back story, I have seen.  Bee arrives  to  Earth  and crosses paths with U.S. soldiers led by Jack Burns (John Cena). He thinks that the Bumblebee and anything that looks like him is a enemy of earth. He wants to kill the all.  Bumblebee is  attacked by a Decepticon, and his voice is taken away and he losses his memory.  Bumble isn’t that camero your use to. He is in the 80’s and he is in his original form from the cartoon we grow up watching (Volkswagen Beetle).  Mechanic Charlie Watson (Hailee Steinfeld) discovers him in a garage and buys Bee as her new car.  Charlie is  distance from the rest of her family and anti-social. Her  mother played by  Sally (Pamela Adlon), step-father Ron (Stephen Schneider) and little brother Otis (Jason Drucker). Charlie realizes that Bee is more that beats the eyes.  We have two new  Decepticons, Shatter (Angela Bassett) and Dropkick (Justin Theroux), who locate  Bumblebee  on  Earth, Charlie is now thrown into an action packed adventure to protect Bee and Earth. That’s a lot for a teen but, it’s awesome. The storyline was amazing. Charlie and Bee both find their own voice in this movie.   Bumblebee’s not verbal acting touched me so much, you could see the compassion and love. Your going to fall in love with Bumblebee. Bee is a badass in this movie, it makes me have a new respect for him. Who ever did the music for this movie, did a superb job. The flow of the music took us through the journey of Charlie and Bee. I’m a 80’s baby so I was having flashbacks.  Lushradioonline had he pleasure to gift some listeners with some screening tickets and it was all smiles.  We had some veterans attend and some children.  We also, had some winners of our PepBoys  gift card too. This was the best transformer film by far. I give it  five thumbs up. #Bumblebeemovie 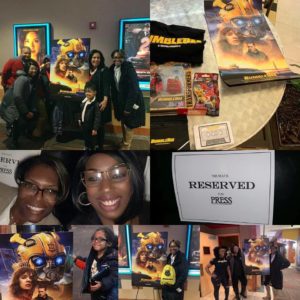 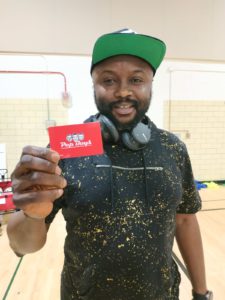 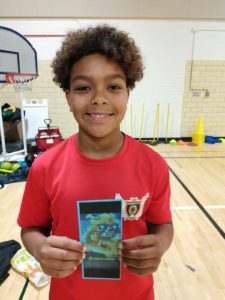